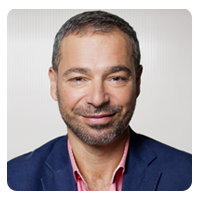 Since 1996, Fred has created and taught leadership programs, personal mastery, team learning, organizational effectiveness and coaching for thousands of executives and consultants worldwide.

After completing his Ph.D. in Economics at University of California, Berkeley, Fred devoted himself to teaching. He taught at Sloan School of Management and in 1992 he was named “Teacher of the Year”. During his years at MIT, he worked alongside Peter Senge as a senior researcher at the Center for Organizational Learning. Additionally, he is a founding member of the business area of ​​the Integral Institute of Ken Wilber.

His book, The Conscious Enterprise, has been translated into more than ten languages ​​and his articles have been published in various journals such as Econometrics, The Journal of Public Economics, The Fifth Discipline Field Book, and The Journal of Organizational Dynamics.

Fred lives on his sailboat, sailing, diving and fishing in the Caribbean Sea. He returns every so often to land to work in the development of executives and coaches in Silicon Valley and Latin America. He is an enthusiast of adventure skiing, mountaineering, fitness, organic nutrition, and natural health.